Learn more about Codequiry's code plagiarism technology and how our similarity detector works. 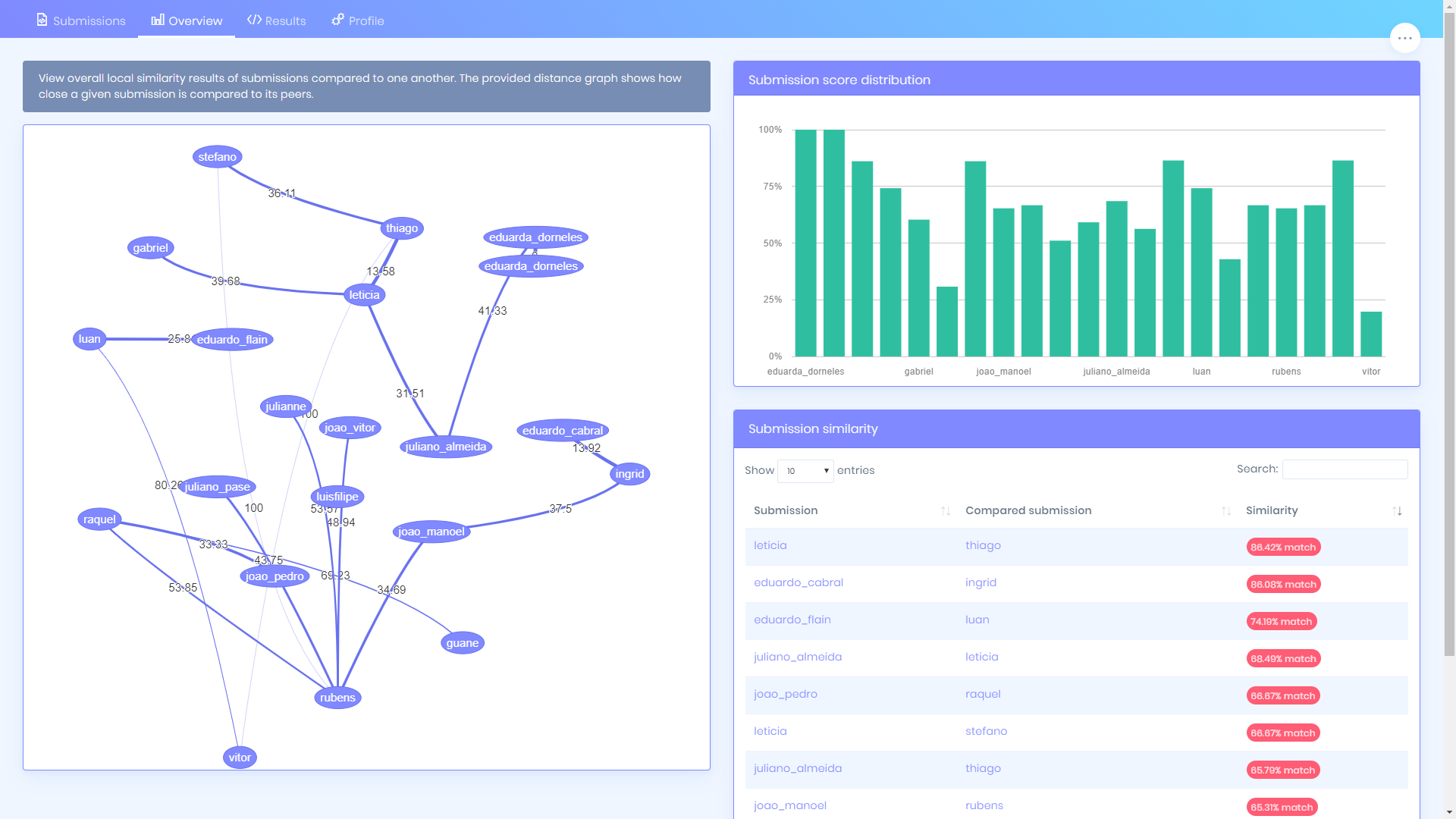 How a Code Similarity Checker Works?

The use of a Code Similarity Checker has always been around for years. Examples of some widely used programs include Codequiry, Plague, MOSS, JPlag, YAP program, and many more. All these programs have recently received attention for the following reasons:

• The Internet search engines like Google have made it very easy to obtain the source code.
• The “open-source” movement has allowed programmers to write, share, and distribute code.

Additionally, an increase in the mobility of high-tech employees has contributed to code sharing, leaving one company behind, and showing up at a different company. This has made Code Similarity Detection programs to become more sophisticated.

How a Code Similarity Checker Works?

In the very first stage, the source code submitted is analyzed and transformed into a series of tokens. For instance, one token could represent the use of a certain variable. Another person could have used a different name referring to that variable, but all that a Code Similarity Checker program knows is that there exists a variable in the structure. Similarly, the tokenization process may check the way in which loops are constructed, and the different keywords which are associated may be mapped to similar tokens. Areas like indentation, line spacing, and comments may not be considered.

At the second stage, the tokenized versions of all the source code submissions are then compared, so as to identify the pairs of documents that contain substantial overlaps Codequiry Code Similarity Checker looks for a cluster of similar submissions, in which groups of people have submitted similar codes.

Modern source Code Similarity Checker engines have become more sophisticated. For instance, they may compare codes against different students who have previously taken a programming class, look for answers that are similar online, check for similar assignments from other institutions, or even check if the coding style followed is the same as the one taught at a particular institution.

The most important aspect of Codequiry's checker is that the results you obtain are extremely meaningful and detailed, allowing you to investigate potential cases of plagiarism with provided evidence. The evidence is clearly provided in a way that reduces investigation times for educators. When a submission is flagged by our code plagiarism checker most likely there is something going on with that submission. Machines are not foolproof, so everything that Codequiry Code Similarity Checker suggests may not represent plagiarism. But, it takes little effort for an experienced programmer to observe the reports and come up with their own judgments.

The Codequiry program really works differently from other Code Similarity Checkers. The algorithm it uses can be described by the following:

• It eliminates all punctuation and whitespace from every source-code file and all characters get converted to lowercase.
• File fingerprints are compared to find similar files.
• Unlike other programs, Codequiry discards variable names, comments, function names, and many other identifiers that may be useful in detecting plagiarism. By using a weighted detection system, the code plagiarism checker can prevent false positives. These false positives can create confusion in the plagiarism detection process
• To speed up execution time, Codequiry uses statistical algorithms to look for any matches. While this may result in the program to complete faster than if it uses deterministic algorithms, it also results in small but non-zero chances of missing plagiarized pairs program.

Codequiry unique advantage over other code plagiarism checker tools is its reliability in determining that actual plagiarism exists. Intellectual property litigation experts have used the Code Similarity Checker from Codequiry to successfully search for source code which has been plagiarized. This has been used to compare two files, listing all their similarities as determined by the algorithms. It also compares many files in different directories and ultimately ranks them according to the most similar pairs.

Due to a lack of plagiarism checking within computer science, hundreds of thousands of students yearly are reusing code found on the web, or copying code from classmates. This leads to an unfair and unequal culture in computer science, where those cheat end up doing better than those who don't. Due to a lack of consequences and tools for catching plagiarism, this problem continually grows. Codequiry aims to empower educators by ensuring their academic culture remains fair for all students. If you would like to preserve a culture of academic integrity just, get started.

How Does the Codequiry Algorithm work?

When it comes to the algorithms used for similarity comparison against peers, Codequiry obtains a weighted average of three unique tests, all of which produce a result based on logical similarity and language similarity. For web matches, we have a passive machine learning layer as well as another set of unique tests to check for web source similarity. Along with the billions of sources checked on the web, popular source code websites with content blockers such as Chegg and CourseHero are also checked. Most cases of plagiarism are through students copying the code from the web such as GitHub, Stackoverflow and more.

When a professor confirms a case of plagiarism, our code plagiarism checker improves its knowledge of features that contribute to plagiarism, as well as improves its confidence level. As cheating evolves, and students try to beat code checker systems, it requires that the detection system can improve and change, thus Codequiry’s algorithm is constantly learning better strategies every day.

One of the largest difficulties facing professors is a false sense of security regarding existing platforms. In comparison analysis, Codequiry was able to detect copied code that other online code plagiarism checkers failed to find. Obscured feedback results in other code checker software, have allowed copied code to go undetected. Cheating students are often located in cluster like formations, which can be hard to visualize with text-based feedback alone. For this reason, Codequiry offers visually rich and detailed charting via a specialized node map.

Codequiry aims to achieve an equally fair environment for fields relating to computer science by preventing the use of unoriginal code. The first step to preserving academic integrity and original source code starts here.